Listen to the dialogue and choose the correct alternatives

1. The young people are going to the … concert.
A) Beatles B) Led Zeppelin C) Guns N’ Roses

4. The girls would like to go alone as they think boys … .
A) always misbehave
B) don’t like trips
C) can’t organize transport to the concert

5. Tom considers this concert to be … than the last-year school trip.
A) less important
B) of greater importance
C) more ridiculous

7. Jane agreed to go with the boys because Tom’s arguments were … .
A) violent B) persuasive C) tenuous

8. The girls will get … if the boys go to the concert.
A) embarrassed B) excited C) angry

10. The young man promises to … .
A) drive them all to the concert
B) behave himself
C) kill Jane

Read and decide if the statements are true, false or nothing is known from the text

Maps were made long before reading and writing were invented. The earliest map that we know of is a cave painting in the Lascaux caves in France. The painting shows a part of the summer night’s sky 16,500 years ago. Modern astronomers can still understand the night sky shown in
the map. A four thousand year old map made by the Babylonians is still in existence. Many ancient map-makers thought that the world was flat, but explorers like Magellan in the 15th century sailed around the world and helped to make better maps. Besides, measurements taken by satellites show that our planet is slightly pear-shaped.
Satellites have also provided more accurate information and have helped to see and map parts of the world that were little known or never seen by humans before. Satellites have photographed the Amazon rainforest and have shown that the area the size of twenty football pitches is being cut down every minute. Pictures taken from space have also shown that one of the world’s largest areas of inland water, the Aral Sea, has been shrinking very quickly. Modern satellite
maps show the effects of global warming and pollution and help us to understand the world around us better. More and more drivers nowadays rely on satellite navigation in their cars so the traditional road maps may not be around much longer.

11. Writing was invented a long time after the first map was drawn.
A) True B) False C) Not known

13. The first map was made by the Babylonians.
A) True B) False C) Not known

14. Babylonian map-makers were very rich men.
A) True B) False C) Not known

15. Magellan’s explorations helped the map-makers to improve their maps.
A) True B) False C) Not known

17. Modern maps are more detailed and accurate.
A) True B) False C) Not known

18. The Amazon rainforest is gradually disappearing.
A) True B) False C) Not known

19. The level of the Aral Sea has been increasing.
A) True B) False C) Not known

20. Soon the traditional printed road maps may be out of use.
A) True B) False C) Not known

Fill in the gaps with the right options

Choose the words which correspond to the following definitions or pictures

31. a British word ‘pavement’ in American English
A) sidewalk B) side line C) side street

32. a word or phrase that is difficult to say quickly and correctly
A) mouth twister
B) language twister
C) tongue twister

34. movement of people or cars along the street
A) traffic B) vehicle C) transport

35. not able to walk normally because of injury or defect
A) dumb B) humpy C) lame

36. to give somebody hope and confidence
A) to encourage B) to encroach C) to enclose

A) daffodils
B) cornflowers
C) dandelions

A) oyster
B) octopus
C) otter

39. to be in a difficult or dangerous situation
A) to get into trouble B) to trouble C) to interfere

40. to stop attempting to do something
A) to give away B) to give up C) to give off

Dо you know idioms? Choose the necessary words to complete or explain them

41. It happened ‘out of the blue’ means … .
A) it was unexpected
B) it was painful
C) it happened from time to time

45. If you do something at the last moment it means you do it … .
A) at the tenth hour B) at the twelfth hour C) at the eleventh hour

Help the guide to make up a short excursion, choosing the correct variants 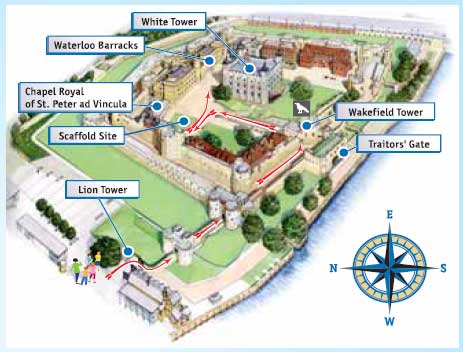 Welcome to The Tower of London!
Let’s go … (51) this path to the main entrance. If you look … (52) you’ll see the Lion Tower where wild animals were kept during the reign of Henry III. Now we are entering the Tower.
… (53) you can see the Traitors’ Gate. Many Tudor’s prisoners entered the Tower … (54) this Gate. Look at this tower … (55) us. This is the Wakefield Tower. This way, please. This is Scaffold Site or the Tower Green, where British nobles were executed by beheading. The Tower Green is located on a space … (56) of the Chapel Royal of St. Peter ad Vincula, where Anne Boleyn is buried, but her ghost is said to be walking … (57) the White Tower. Let’s go … (58) the White Tower. If you want to see the Crown Jewels, you should go … (59). They are on display in this yellow building – Waterloo Barracks. But we go this way
and enter … (60) White Tower!